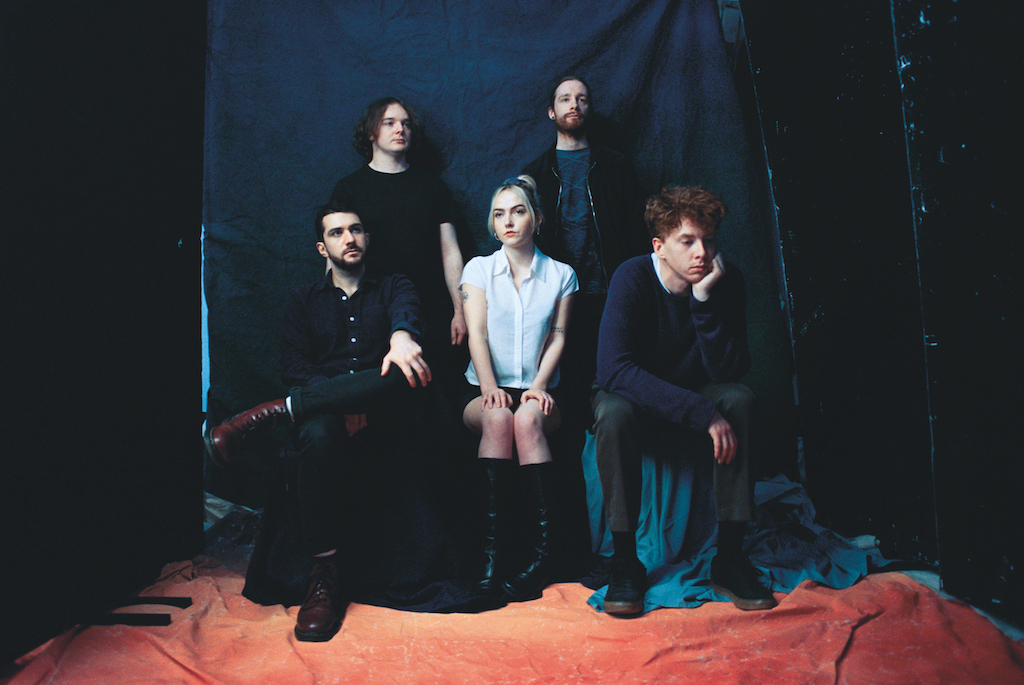 Comprised of vocalist Katie Ball, guitarists David Noonan (also backing vocals) and Mete Kalyon, bassist Rob Clarke and drummer Shane Maguire, Just Mustard have been steadily building a reputation as one of Ireland’s most thrilling new bands – live and on record – since forming in 2016.

The Dundalk band’s heady blend of noise, trip hop and electronic influenced music earned their debut album ‘Wednesday’ huge acclaim in their native Ireland in 2018 – including a Choice Music Prize nomination for Irish Album of the Year. NME dubbed their debut “a two-toned masterpiece” and the Irish Independent described it as “a swirling atmosphere-heavy thrill-ride”. Earlier this year, the band made their first major strides internationally with the AA side ‘Frank//October’, gathering acclaim outside of Ireland; KEXP made ‘Frank’ their ‘Song Of The Day’, BBC Radio 1 named it ‘Tune Of The Week’, The FADER offered up the premiere of the song’s video and ‘October’ drew the acclaim of Stereogum.

This momentum carried through to live, with the band supporting Fontaines DC on their sold out UK tour, emerging as a ‘band of the weekend’ at Brighton’s Great Escape Festival and coming out of Primavera as one of the “12 best acts” according to NME. Just Mustard were handpicked by Robert Smith to support The Cure at Malahide Castle and their electrifying live show also earned them bookings across leading summer festivals Green Man and Electric Picnic. In 2022 they have already received a rapturous response at SXSW, and have a headline UK/EU tour lined up in Autumn, as well as another support slot with Fontaines DC on their US run.

Heart Under’, Just Mustard’s second album and first for Partisan Records is a remarkable record that turns a year of lockdown and personal struggles into a breathtaking artistic statement.Since the release of debut album ‘Wednesday’ in mid-2018, the band have undergone a subtle but firm transition, through propulsive 2019 single ‘Frank’ and the gargantuan ‘Seven’ from later that year. While ‘Wednesday’ and subsequent singles pushed Just Mustard away from fitting snugly into the shoegaze category they once occupied, ‘Heart Under’ makes them stand alone as a band that sound like no other. Across its 10 tracks, the album presents a coherent style and ethos –those scything guitars, Katie’s magical vocals –but still incorporates a wide and untethered vision. There are brooding, atmospheric rock songs (‘Still’, ‘In Shade’) and others that apply a lighter, dreamier touch (‘Sore’, ‘Mirrors’), all tied together with impeccable instrumentation and a united vision.
“This album felt very blue to us,” Katie says of the overarching vision behind ‘Heart Under’. “There was sadness and sorrow in the album, and it felt like being underwater and under something very heavy. We let that influence the music, but it wasn’t a decision –it just naturally happened that way.” Primary recording took place in Attica Studios in rural Donegal, with additional recording and post-production then completed at home, and this extra time they gave themselves results in an even richer and more intricately composed record. Katie’s vocals were also recorded at home, with extra time and space that allowed her to give a more emotional and honest performance. “The emotion in the vocals is really important to me, and I could really zoom in and take my time when recording at home,” she reflects. After the band had finished recording and producing the album, ‘Heart Under’ was pushed even further into singular territory when the band worked with mixer David Wrench, whose previous collaborators include Frank Ocean, Let’s Eat Grandma, Jamie xx, FKA twigs and beyond. “We wanted someone who had done pop and electronic records and didn’t just work within rock music,” Katie says
Though written in the depths of 2020, ‘Heart Under’ is a personal document of a time that doesn’t comment on realities of the outside world. “I always write about what’s going on inside my head rather than anyone else’s,” Katie says. “We all use music to escape, and it’s good to have a break from life with music.”An album not categorisable by genre or era, ‘Heart Under’ is a guitar album with guitars that don’t sound like guitars, an album that stretches traditional frameworks to make a thrillingly unique sound, and an album like little else you’ll ever hear.